Well,
The dog of this blog crossed the rainbow bridge on October 29, 2017.
She was born April 24th 2004, so she was with us a good long while. The last day was unexpected and not how we thought it would go or how we wanted it end. It was heartbreaking but we were thankful to all be together and with her.

For the last year though she had Biscuit, Thing One's rescue dog, to keep her company, annoy her, and give her someone to mother. Now that her Things are all grown up she needed that. 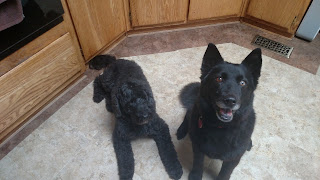 From beginning to end she was such a lovely soul. I am so glad we got to love her and we miss her so. 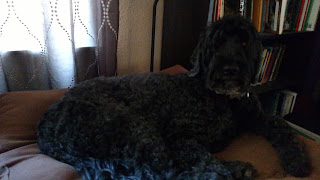 Posted by HDN at 7:44 AM No comments: Links to this post

Today is the last day of my first real grown-ass getting-paid-money-for-40-hours-a-week-with-benefits-and-all- that-jazz job. My contract ends today and it was just a two year sort of deal.
So now I am going on unemployment for the first time.
I am also job-hunting, which is a soul devouring way to spend some time.
However, I am trying to focus on the time off.
Thing Two has just graduated and is also job hunting.
Good times.
You know, they do say shared trauma draws people together, so I expect this to really unite us.

I kinda sorta super love being a librarian. It's the bomb.
Posted by Logophile at 2:46 PM No comments: Links to this post

I've noticed I don't write much in Facebook,
and I hardly ever visit Tumblr.
I neglect Twitter and Instagram horribly and I deleted Snapchat because it was meh...

Especially since November I've been burying my head in the sand as much as possible. But I popped over here to find something I'd posted years ago.

Looking back through this blog gives me such a great frame of reference for when things happened. I love having it here to refer to when I want to figure out when something happened.
Being temporally displaced I find my ability to put events I remember clearly into a month or year is not a strength. I have quite a chunk of my kids' lives documented here so it is pretty handy.

Thing One is about to be 21. We are going to take him to Smash Putt.

Here are some highlights of the waiver (can you imagine a waiver with highlights??)

SMASH PUTT- MINIATURE GOLF MAY KILL YOU
By entering the premises, you are expressly agreeing to be bound by this agreement.
You acknowledge that Smash Putt is a physically challenging event requiring a range of body motion along a miniature golf course that more closely resembles a military obstacle course. You further acknowledge that illumination is variable and tripping hazards are plentiful. You even further acknowledge that portions of the terrain and surrounding may be mechanically, electrically, or in some other way, controlled by robots, and as a result, may shift randomly and dangerously and may pose a risk of injury or death.
You agree that Smash Putt is not liable for acts of God, actions taken by government agencies, or zombie apocalypses, whether foreseeable or if the zombies take you by surprise.

It is a temporary event and is right off Post Alley. I'm kinda psyched to take the kid, and also, if you are going to take your kid to a bar... this is the only way to go.

Thing Two is going to be 18 in a couple months and then I will only have adult children which is freaky to consider. Good and awesome, but freaky.
The younger Thing is taking it easy this year, only required 4 classes to graduate and so... that is all is he is taking. He isn't doing tennis or track this year either, although he is spending a LOT of time with his girl friend, so there is that.

It is fun and weird to look back at the record of earlier years and contrast it to today.
It always makes me want to get re-engaged in blogging but the impulse doesn't seem to stick.
Nostalgia, man, it is real.

since this blog started. We've passed the actual anniversary.
Craziness

Friday I visited the Pike Street to play tour guide with a friend and his new girlfriend and we went down to the waterfront as well. It was a fun if somewhat a test of my ability not to say things I am thinking. Our friend has 30+ years on his girl. So, ya know...

However, in less fun news, I also visited with an older gal who works in the library where I am the volunteer director. The previous director, an awesome lady, a great mentor, and one of the people whose glowing recommendation got me into the University of Washington library program, passed away two weeks ago. Jo was one of those precious people you just don't ever have enough of in life, and she will be sorely missed. I worked with her for a couple years but my friend worked with her for about 15 years and is really missing Jo. Raw grief is  just heart-wrenching.

Also this last week I interviewed for a job which might be nice to have. The location is a little far but the facility is amazing and the staff is fabulous. I also went to see a friend for some input and prep work for an upcoming job interview and teaching demonstration, AND got to see some of the people I worked with last year, who are lovely. I heard from my former boss and her boss that they have put in good words for me, so I am feeling REALLY really hopeful.

This week I decided to try immersing myself in popular culture by indulging in an total excess of TV watching to see if there are any new shows worth tracking. Here are my reviews so far...
The Muppet show, meh (it wasn't bad but it wasn't really that good either)
Heroes Reborn... hmmm (I am guardedly hopeful and intrigued)
Blind Spot, uh huh (I will probably watch another one)
Minority Report, eeeeeeh (maybe, I don't know)
How to Get Away With Murder, whu...? (I watched the whole last season, and she SOO deserved that Emmy, but I kinda have whiplash from the season 2 opener)

So there ya go!

You know what I haven't done in a long while?

Well, posted on this blog, but more to the point for today... one of these!

B- Biggest Fear: Clowns and carnies (they smell of cabbage and have tiny hands)

D- Drink you last had:  coffee (iced Americano with a splash of cream to be specific)

E- Easiest Person To Talk to: Myself, I'm always there when I need me, I always listen, I always seem to understand what I'm trying to say, I hardly ever interrupt, I often laugh at my jokes, and I

F- Favorite Song: There is never just one but at the top of the list and the rotation changes frequently but maybe at the moment,
Tear in My Heart by 21 Pilots

Could Have Been Me by The Struts
Ship to Wreck by Florence + the Machine
Stop the World I Want to Get Off with You by The Arctic Monkeys
I Am by AWOLNATION
and to be clear— I am talking about the songs, not the videos


G- Ghosts, are they real: I refuse to answer this question on the grounds there are more things in Heaven and Earth than are dreamt of in your philosophies, Horatio.

I- In love with: Crisp fall mornings that give way to gloriously sunny afternoon

J- Jealous Of: People who have a personal assistant. I so need one.

K- Killed Someone? Give me a break, like I am going to admit that on the interwebz.

L- Last time you cried? Last week when I learned a very sweet library mentor of mine died.

M- Middle Name: Artemis, but not in the Greek


O- One Wish: Wings that work

Q- Question you're always asked: Why do you know that?

R- Reason to smile: Thing One and Thing Two

X- X-Rays you've had: So many, don't walk in front of cars, fall off curbs, get in car crashes, etc. etc.

Y- Your favourite food: Things other people made for me

So, today I got to spend some time downtown, a bit on my own and a bit with friends. I went to the library (of course) in my free time and then met friends at the Elliot Bay Book Company— actually, I walked there from the Central branch of SPL. It is a nice walk on a gorgeous day but mostly uphill so I was really glad to get a ride back down to Town Hall, which is where we were all going, after dinner, to see Brene Brown.

I love the Brene Brown even though she is a horrible person who tries to convince everyone be vulnerable and real with each other.  Some people just want to watch the world burn. My sister, the social worker, gave me her ticket to the event and so I got to go and hang out with her friends, the social worker Brene Brown groupies. They are the most emotionally supportive fan club EVAH.

As an awesome topper to the evening... I lost my debit card, just before we leave for a trip to Canada, brilliant timing, yes? Mr. Logo and I have accumulated 25 years of togetherness and we have decided the only possible way to celebrate the occasion is to flee the country. The traditional gift is silver I've been told but we both bought each other chocolate, because who the heck wants silver stuff someone will have to dust and polish when you can have delicious chocolatey goodness? Well, we each got that and an upcoming trip on the Victoria Clipper up to Vancouver Island where we will visit the Empress Hotel and have high tea.

Life is good.
Posted by Logophile at 12:30 AM No comments: Links to this post

Did you hear my state is burning to the ground?

I am in Spokane currently, visiting friends and family. Not too long ago the air pollution here was so bad from the fires that people were being encouraged to stay indoors.
Today it is drizzly here and although the visibility is not any better than it was when the sky was thick with smoke haze, it smells considerably better.


They tend to call anything west of the Cascade mountains "the coast." This is blatantly inaccurate and inexcusable. Below you see a map of Washington with a highlighted line along the mountains in the middle-ish of the state. To the far left you will see another highlighted area— the actual coast of Washington, where the Pacific ocean meets the land. There is also the Puget Sound, but that is not coastline.

Now, the people over here on the east side have a sort of reciprocal complain about us Westies. We tend to call everything on this side of the mountains "Eastern Washington" and the people over here get all all knotted up about that because they insist there is a Central Washington. However, I have to tell you, there is almost nothing of note in the middle of the state (other than Hanford, which we frankly try to ignore) and nothing in particular to demarcate where this supposedly central region ought to be. So They make stuff up and they also can't use geographical terms correctly. We win.


Posted by Logophile at 6:34 PM No comments: Links to this post