We are going to go see the Esteemed Elder Sister in Spokane and visit various other fascinating Washington destinations.
Ariella will be going to stay with her favorite babysitter, who spoils her rotten. She hogs the poor girl's computer chair, steals her pillow, and the deluded child thinks Ariella is soooo cute and precious. :p Works out well for every one.
Posted by Logophile at 3:34 PM 5 comments:

The world is so full of a number of things,

that I'm sure we should all be as happy as kings.
R.L. Stevenson 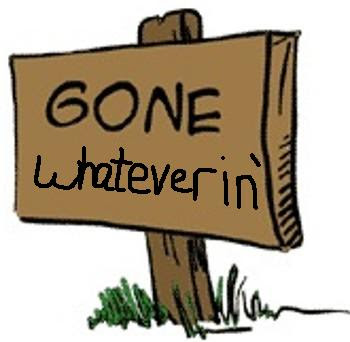 Thing One has just finished the first book in Terry Pratchett's Bromeliad trilogy, Truckers, and is starting the second one.
Thing Two is reading Pete and Fremont, and now I suppose he will want to run away and join the circus.
Mr. Logo recently finished Last of the Breed. He saw me rereading it and was suprised I was reading a book by Louis L'Amour. He knows that westerns aren't really my genre. He is typically more of a non-fiction reader, but we both really enjoyed this book. Our tastes in books don't overlap too much but since he liked Matter of Honor I knew he would like this one.
I just finished Talk, Talk.
I am loving the whole "It's summer!!" thing, how 'bout you?
Posted by Logophile at 7:58 AM 9 comments:

Yesterday was the solstice, did it SEEM like a long day to you?
We didn't have sunset till 9:11 here.
It's officially summer now, regardless of the clouds and rain, just you remember that.
We had our traditional bonfire, complete with smores and such, and stayed up much later than seems reasonable or prudent. 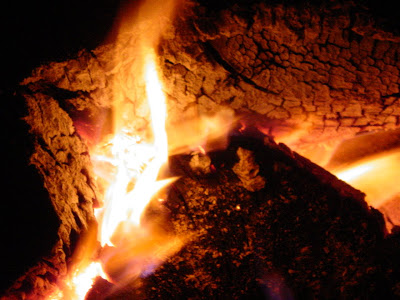 I love sitting around the fire after the dying light of the longest day has finally ended, staring into dancing flames. 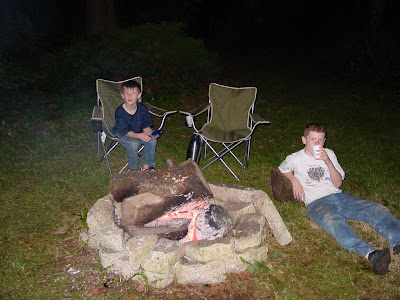 Take a trip, read a book 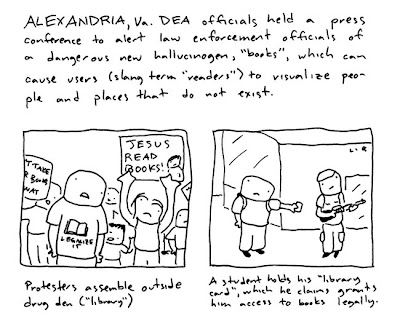 The Mountain Loop Highway is one of my state's most popular weekend drives. It meanders past the South Fork of the Stillaguamish River from its headwaters at Barlow Pass after winding its way through the Mt. Baker-Snoqualmie National Forest. It features any number of camping areas and hundreds of much loved hiking trails as well as access to three wilderness areas: Boulder River Wilderness, Henry M. Jackson Wilderness, and Glacier Peak Wilderness. Gorgeous views peak out from around every curve and every gap in the greenery.

Seven miles outside Darrington the pavement gives way to gravel, and it remains so for 14 miles. This then would be the ideal trip to take on motorcycles, right? Well, Mr. Logo seemed to think so, and since it was Father's Day, off we went.

I am still dealing with the tail end of this cold, and I don't know if my sense of balance was off-kilter yesterday or what, but even on wide, paved roads I was taking it easy on the curves because something just felt a little off. So obviously dirt and gravel roads were not my idea of a good time. Any time you have reduced traction and two wheel there is a bad, messy sort of inverse ratio thing that goes on; bad things happen faster while all the good stuff takes longer.

Winding our way through miles and miles of narrow one lane road, with occasional oncoming cars, massive potholes, muddy patches, loose gravel, littered tree branches, gullies and ruts would have been fun enough, but the road also features the occasion sheer cliff on one side as a bonus.

Then, when we got close to Barlow Pass we found the road was still covered in snow. Now my thoughts on motorcycling and snow are this;

the twain should not ever, Never, (I FRICKING MEAN NOT AT ALL!!) meet.

Mind, I am not telling anyone else they what they should do, I am simply stating how I feel about the situation for myself, and my bike. I don't even like it when there are patches of snow on the side of the highway as we go through the mountains. Skiing on snow is lovely, driving in snow, with the proper equipment, is fine. Riding a motorcycle anywhere near snow just does NOT work for me. Needless to say, we turned around and went BACK down the 13 miles of gravel we just rode on the way IN.

At this point Mr. Logo and both the Things began to express impatience at the snail's pace I was setting. Because, you know,

on a 600 pound motorcycle, in the middle of freaking nowhere, on a gravel road, with your child on the back, proceeding at 15 miles an hour is just...um, what is the word?

We finally made it back to the pavement, despite a couple little close calls, and came home.

At least it was better than my Mother's Day. I spent that day in bed, when I wasn't throwing up :p 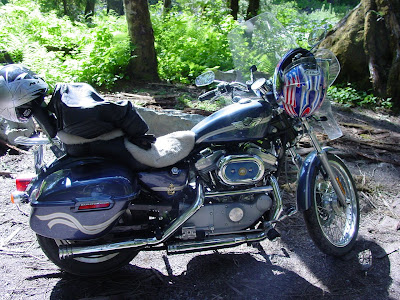 P.S. Sorry about the rant, but sometimes you just HAVE to! 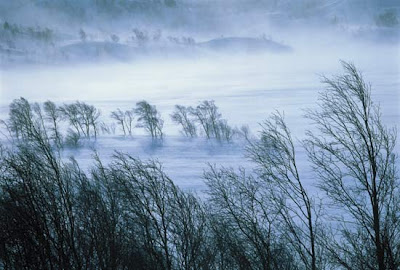 Clouds billowed and the trees bowed and shivered in submission. Swirling debris rose up to riot briefly then was slammed back to the ground. With hands thrust deeply into pockets, a figure fought through the weather, leaning forward at an impossible angle against the headwind. A pair of eyes watched the approach, indifferent and unmoved.

I was moved to be creative today. So there is a flash fiction for you.

I need to mow my lawn and get over my cold. I also need to take Ariella in the vet for her annual shots and such, but I think instead I shall go make a cup of tea and take some cold medicine.

We had a bit of a wind storm here Monday. Several of our trees lost branches and a couple lost their will to live. Yesterday the Things were positively eager to go to yard work, I think this probably is because they assisted in the clean up as pictured here. 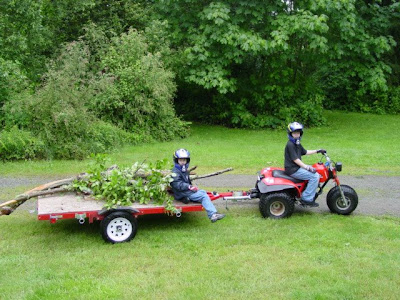 They got a lot of of the limbs cleared and managed not to kill themselves so we are considering it a victory.

Next we have a little discussion of fashion. There are few things nearer and dearer to the heart of your average nine year old boy, hmm?
Thing Two, in the manner of second born children the world over, decided he needed a unique and creative manner of self expression. Since his chosen method does not require unattractive facial piercings, illegal activity, engaging in excessive risk-taking or embarrassing his mother, I found myself supportive. He heard about the dismembering and rearranging of clothes and it appealed to him. He calls it Franken-fashion. 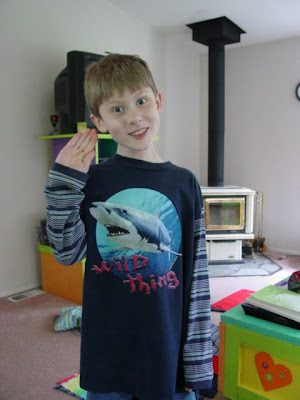 These both feature the back of one shirt, the sleeves of a second and the front of a third shirt. The back of the shark shirt is red, it matches the front featured in the photo below actually. 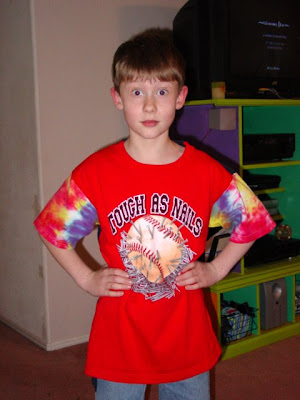 He has even engaged in sewing to make this happen and is quite proud of his creations.
Go, Thing Two!
Posted by Logophile at 7:32 AM 8 comments:

This teeny tiny baby deer follows his mama through the far side of our yard.
Isn't he cute?!?! 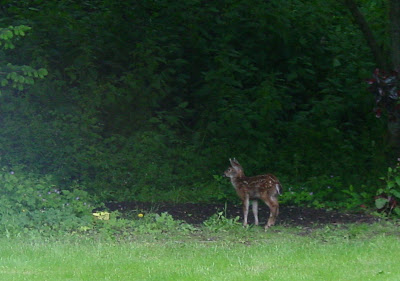 Unfortunately, they only like to visit when we are indoors so all our pics are through windows. You can see my reclection in this next one. The mama deer is fast, which is why only the baby is visble in these shots. 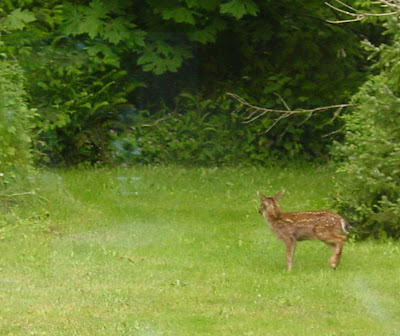 Also,
I thought I would share a little except of a story I work on from time to time. It is NOT autobiographical, at all. Anyway, here is part of the first chapter, tell me what you think, if you wanna.
Everyone was going to be home together, all evening. Rick had no commitments for once; the kids were both, incredibly, planning to stay home as well. Salad, wine, and some fresh bread rested on the seat beside her, along with the 25 other things she ended up buying. No grocery trip could be easy, but the oven timer would have her homemade lasagna ready just moments after she walked through the door. Everything was in place for a family dinner.
Her stomach rolled with a seething unease and something like the anticipation one experiences when headed for a root canal. Hang on, she thought, what was going on here? Was she dreading entering her own home and spending the evening with her family? At some point had she become a person who DREADED family life? How had this happened? What kind of mother, what kind of wife, what kind of person dreads coming home to her family?
She shook her head and plastered a pleasant smile on her face. No, she decided, she could not possibly be that woman. It will be great, she lectured herself. She continued to pointedly seek positive thoughts as she cruise the last few familiar streets, returning the smiles and waves of neighbors playing with children in the yard, walking their dogs, or watering their immaculate gardens.
She pulled in the driveway, tossed her keys into her purse then scooped it up along with her briefcase and the grocery bags and headed for the front door. She tried the latch only to find it still locked. She tried to maneuver around the load in her arms and get her keys out but it was useless. She resisted the urge to grimace, roll her eyes, or grumble. She set the grocery bags on the stoop beside her and unlocked the door. It swung open to a blood-curdling wail. It was a high-pitched animalistic howl, a shriek that a fit-throwing toddler could never dream of achieving. It seemed a sound capable of leveling all opposition, even the very walls seemed to recoil. It was almost, but not quite drowning out the sound of a female voicing yelling. Suddenly then there was a sharp sound, a slap judging from the way the wailing became crying, stomping, and then the slam of a door. Her children were at it again.
Jackie leaned her head against the door, closed her eyes, and concentrated on breathing for a moment. She hadn’t even made it in the door and her fiction of a lovely family evening together was falling apart. Leaving the bags on the ground and the door ajar she followed the sobs and snuffles coming from the family room.
Posted by Logophile at 10:35 PM 5 comments:

The Things and I are loving this video the last couple weeks.
Imma do the things that I wanna do,
I ain't got a thing to prove to you,
I'll eat my candy with the pork and beans.
Excuse my manners if I make a scene.
I ain't gonna wear the clothes that you like,
I'm fine and dandy with the me inside.
One look in the mirror and i'm tickled pink,
I don't give a hoot about what you think.
Posted by Logophile at 8:41 PM 5 comments:

The washer is dead, long live the washer. 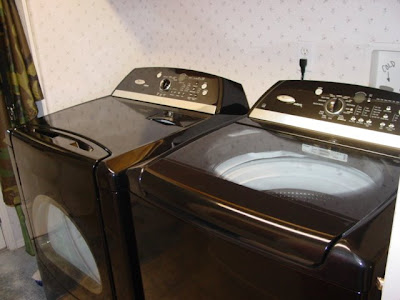 Now that I can wash clothes, I have a laundry mountain, help! 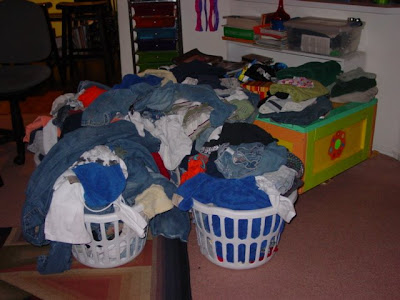