which is my favorite season usually. It is the season of crisp mornings, sunny afternoons, and shortening days. It is my excuse to break out all my cozy clothes and my chance to wear my new raincoat.. in the rain, which, btw, I love as do many Northwesterners.
But...
this year I am also feeling a little melancholy.

S'ok, I am too busy to dwell on it much.

Anyway, it is time to get back to work and such so I will break out some old favorites and get to it.

Posted by Logophile at 4:24 PM No comments:

I had a fabulous weekend!


It should be noted that I am a terrible photo taker so none of these images are mine, I believe I linked or sources to creators. The nice thing is... lots of people have taken great photos, far better than I could have, so really, it is a win for everyone.

Friday Mr. Logo and I headed to Orcas Island to celebrate 24 years of marriage. Although the actual day is Monday, we decided to celebrate a little early when we both had time off.
Have I mentioned I have a job?
I have a job.
Mr. Logo has accepted a position that required long commuting hours and I now work part-time for the education outreach department of the UW Libraries.
Also, the weather was outstanding.
So, Mr. Logo offered to take me away and I wholeheartedly agreed.

We went to Orcas Island on our 10th anniversary and stayed in a cute little bed and breakfast in Olga. We did a biplane ride, and ate at the Inn at Deer Harbor and did some kayaking. We did not see Orcas but we saw other cool sea life. Orcas Island tour services often offer a whale guarantee- see whales or your money back (or your next trip free). There are transient and residential orcas that hang out in the area so the island is aptly named.


One of the great things about riding motorcycles is that we get head of line privileges at the ferry. I really like that. We go to the front of the boat and get off first... usually. In this case there were a TONS of noisy, obnoxious ill-behaved children on the ferry that walked on to go to a camp on the island. They got off first and the camp had buses waiting for them. The entire ride was a bit of a misery and the ferry workers even had to announce, mid-crossing, that running, climbing on tables, etc. was not permitted. The views were still spectacular but it did make me want to smack some parents around.
There is a guy who used to roll his piano onto the ferry and play it on the passenger deck. He would sell his CDs and accept tips. Here is one of his songs that always makes me think of sailing up the Straits. The noise he makes is so much better than the soundtrack we actually had with us.

The pub we tried was rocking an Irish theme, so I had a Guinness and we had Irish spring rolls- surprisingly good and not at all vile. Mr. Logo tried the Irish Stew, which he said was good, and I had a Guinness chicken sandwich, which was lovely.

However, not as lovely as the view. We were sitting by the windows and watched the sun set turn the sky blue and pink which reflected in the water and was just.... aaaaaah, amazing. There is a unique and amazing quality to the islands, I remember enjoying it last time we were there and when I've visited Friday Harbor as well. It was nice to see that time and growth haven't eradicated that feeling.
So, Sunday morning we got up and had an outstanding breakfast before heading out to do some more riding around the island.  It is an incredibly beautiful place.
I definitely need to go back, and not wait quite so long to do so.

We managed, of course, to time our return to coincide with that of the horrible monster children we shared the ferry with upon our arrival. However, we had stopped by the food coop and gotten healthy, yummy snacks and adult beverages and that made it all seem more manageable, plus the kids seemed a little less high-strung.
The bike ride home included one last stop for ice cream, immodest ice cream cones even.

So, that was that and now it's back to the grindstone. Hi ho, hi ho...


Posted by Logophile at 9:32 PM No comments:


Check her out, will ya?

That gorgeous creature sitting there is a friend of mine, Christine, or as I knew her better, Wills- short for William's Wish Wellingtons- her nic in a trivia room we both frequented. She was Australian, and beautiful, clever, witty, friendly, kind and just generally... amazing.
She died yesterday.
I &%@$!*# hate cancer. So for this summer I did a lot of sitting in this chair right here. 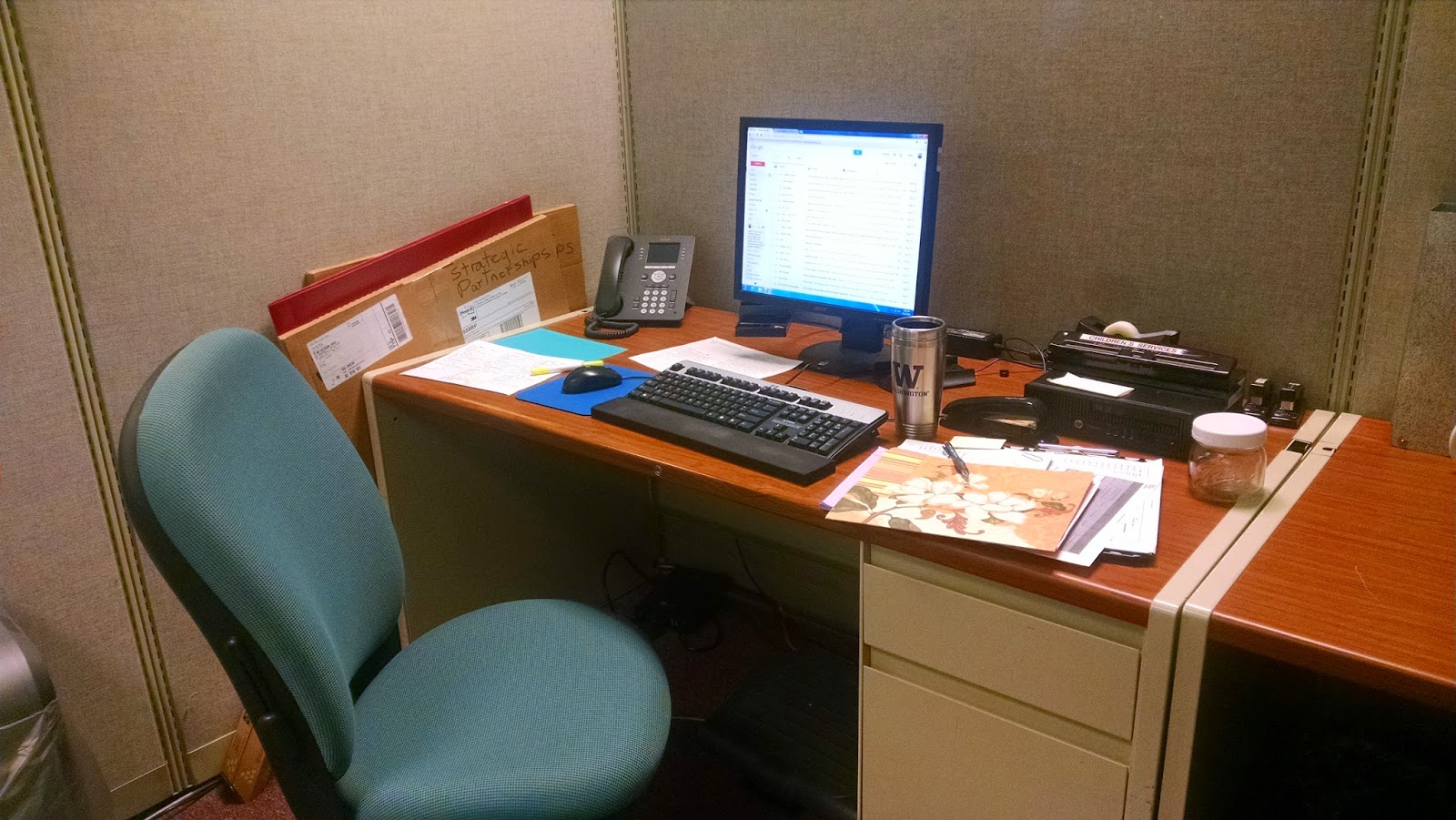 However, I did do a couple of other things, like observational studies about how much people noticed information board like this... 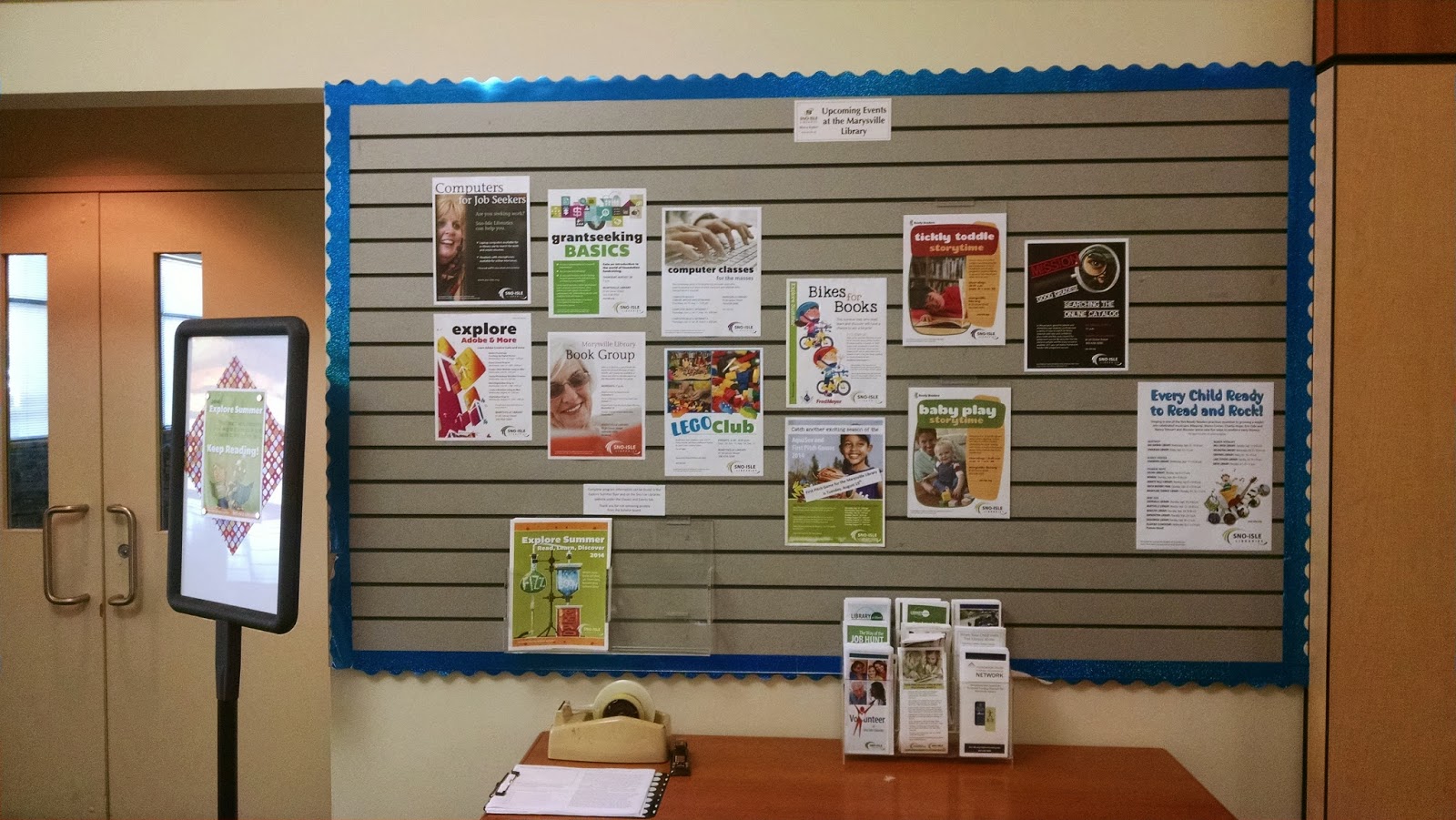 and if they noticed them more when it was altered a bit so that it looked more like this. 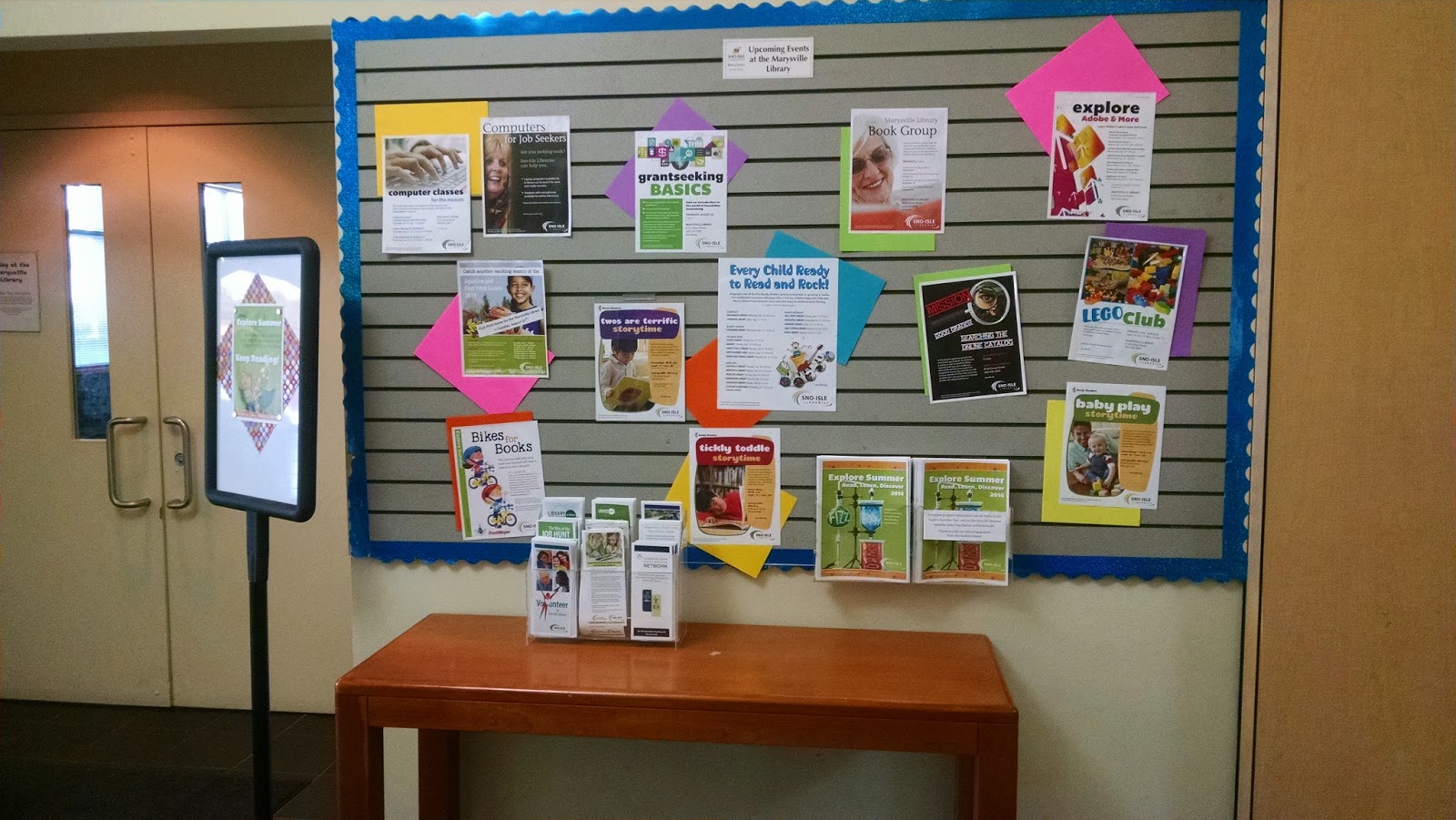 It was actually a really interesting and fun project and I enjoyed it a lot. I am a little sad that it is over even if I am really glad to have a couple days to sleep in.


I  also recently met really cool lady from Tibet and bought some great stuff from her and she gave me this lovely little bracelet at the end of our visit. She said it was a gift because I have a generous soul. It made me feel so good, and made me want to remember to do things like that for other people. 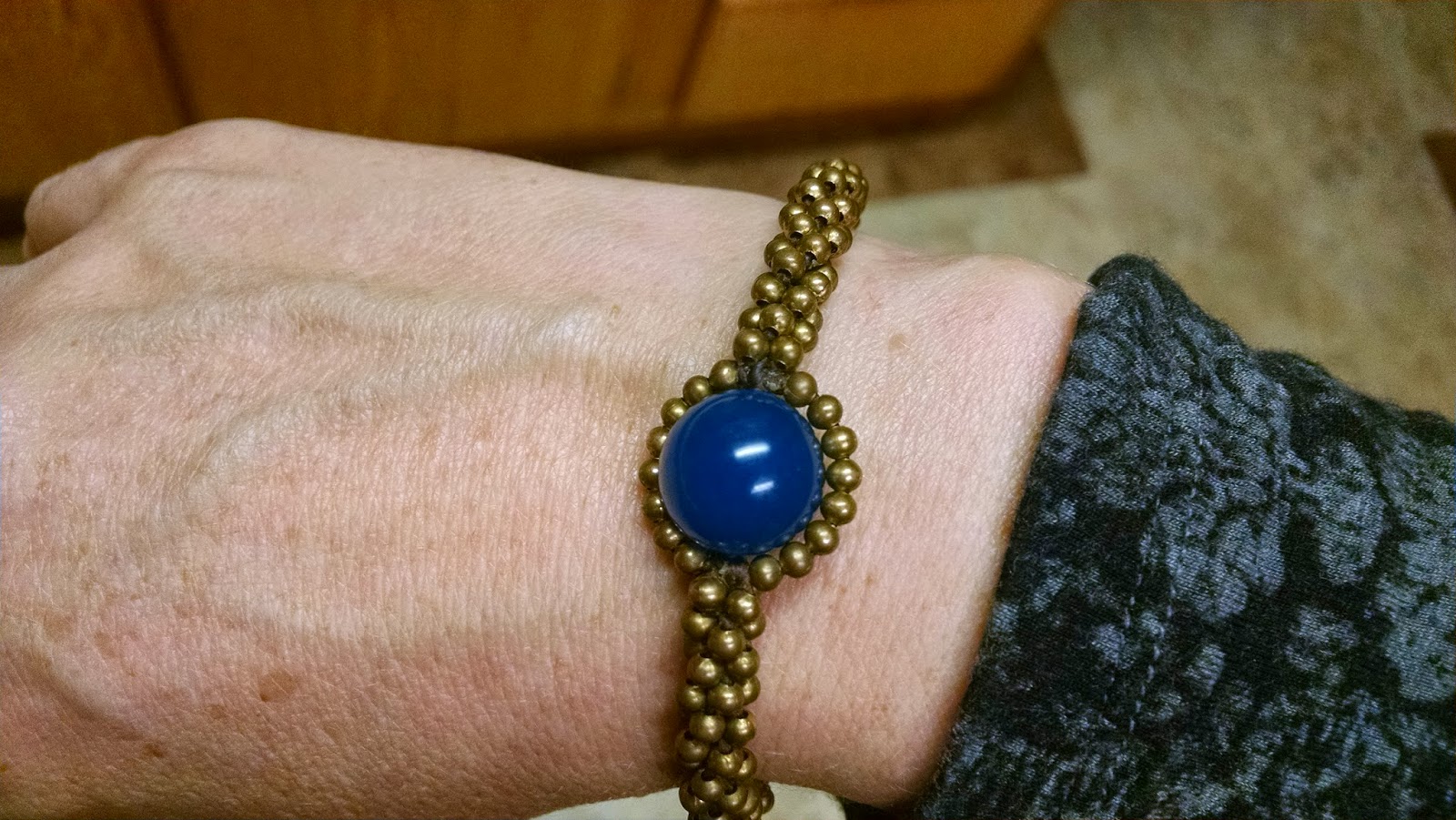 I also finished a yoga intensive, after several months, and it was actually rather awesome. On our last day together we did an incredibly uncomfortable exercise in which we went around the room one-by-one and everyone listed traits or qualities of that person. Afterward we were to put the lists together and keep them where we could see them often (bathroom mirror, etc.). So I made this out of mine, which is not as purty as some, but I like it. I am going to take it off the wall soon and I decided to stick it here on the blog because I will inevitably lose the paper copy. 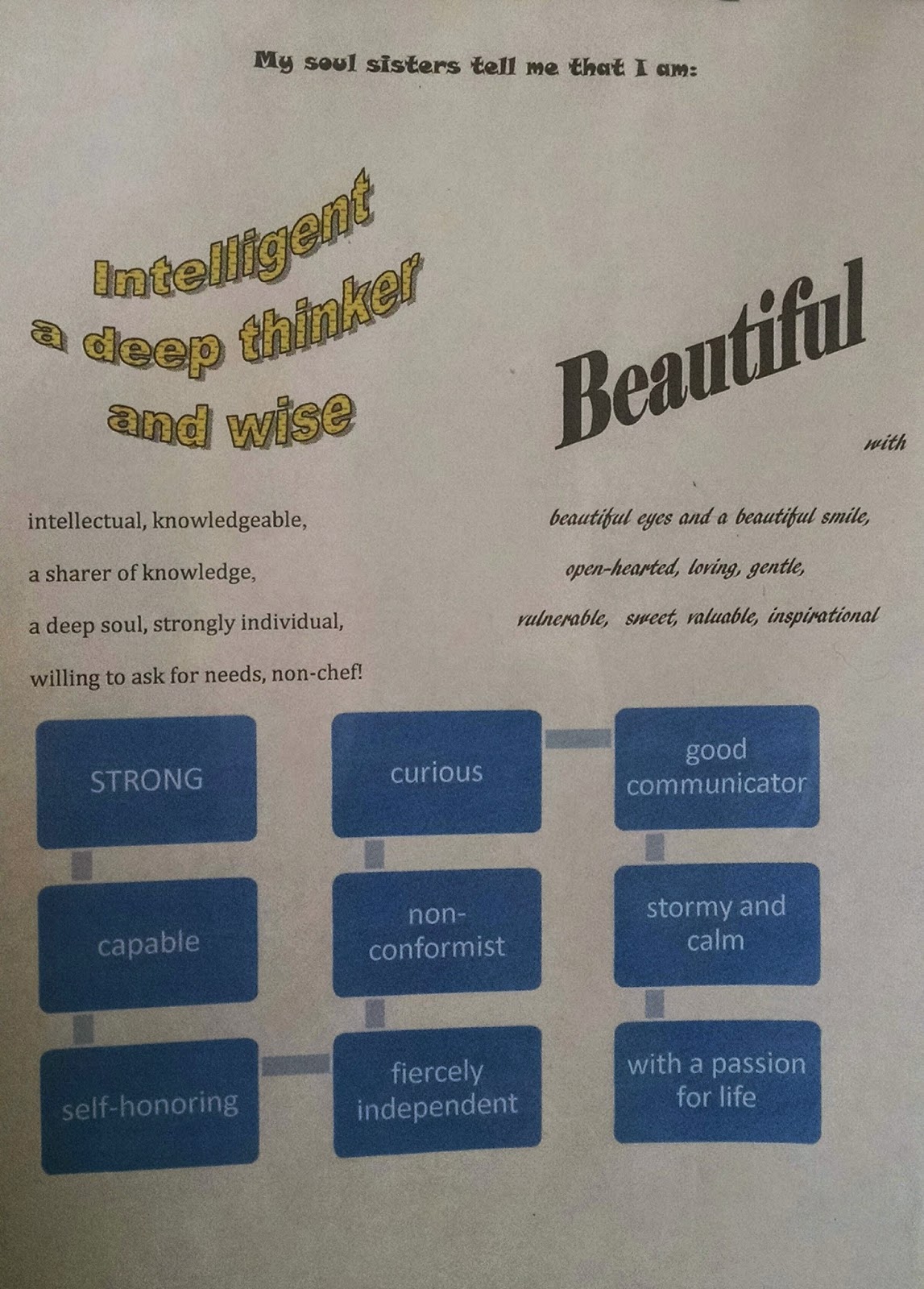 My phone died. It was a long loving relationship, but its time came. So I got a new phone with lots of interesting new features and I am still learning some of them. My children were teasing me while I was fiddling with it and I managed to strobe myself and take this photo which nicely encapsulates my puzzlement about the entire experience. It is getting better though and soon I shall be the master! You can totally see that from the pic, right? 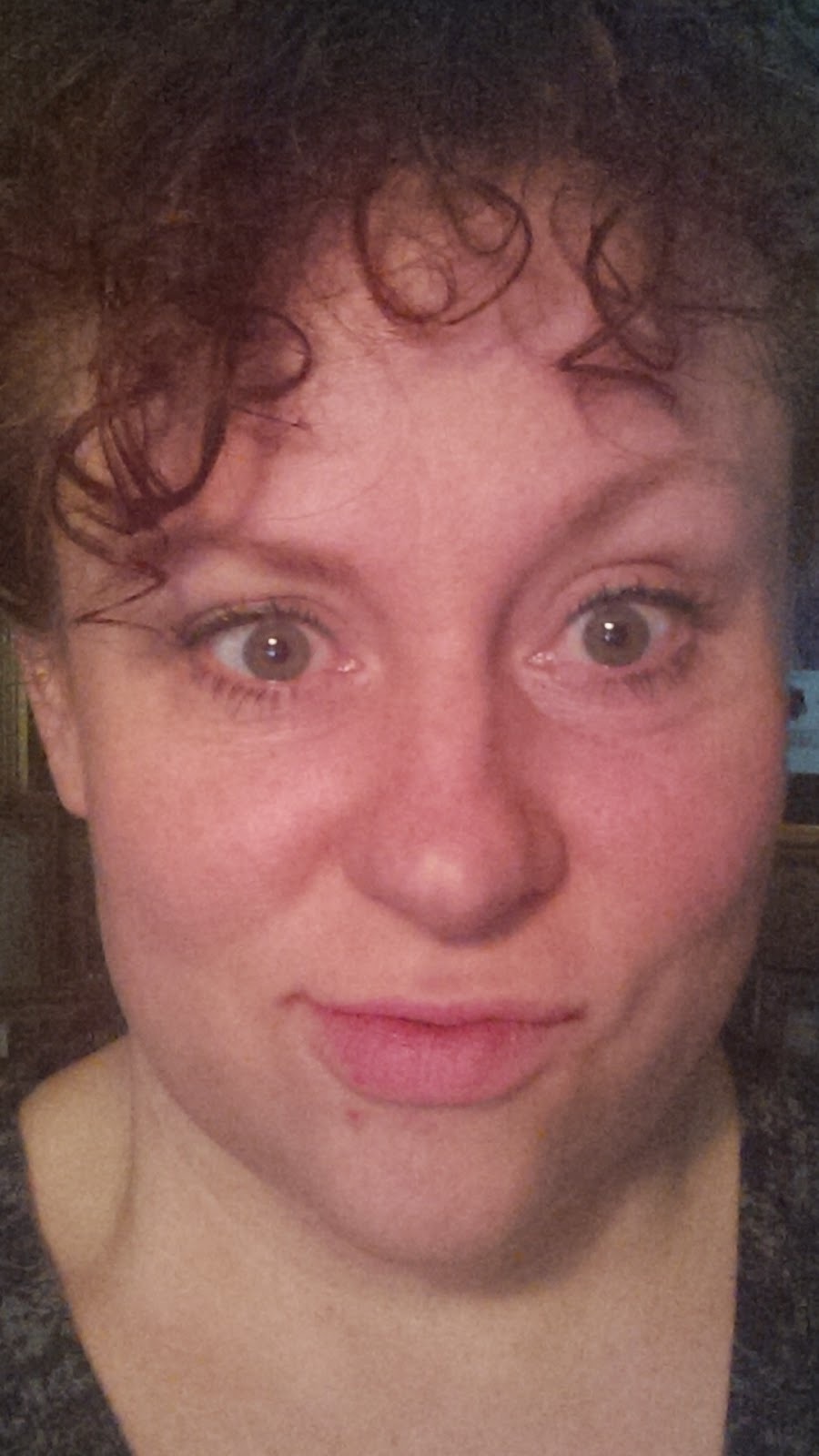 I managed to also get some time to clean my horrifically messy bedroom. This is just the stuff that overflow from the corner and ended up all over the bed. Clearly it was time to do something, 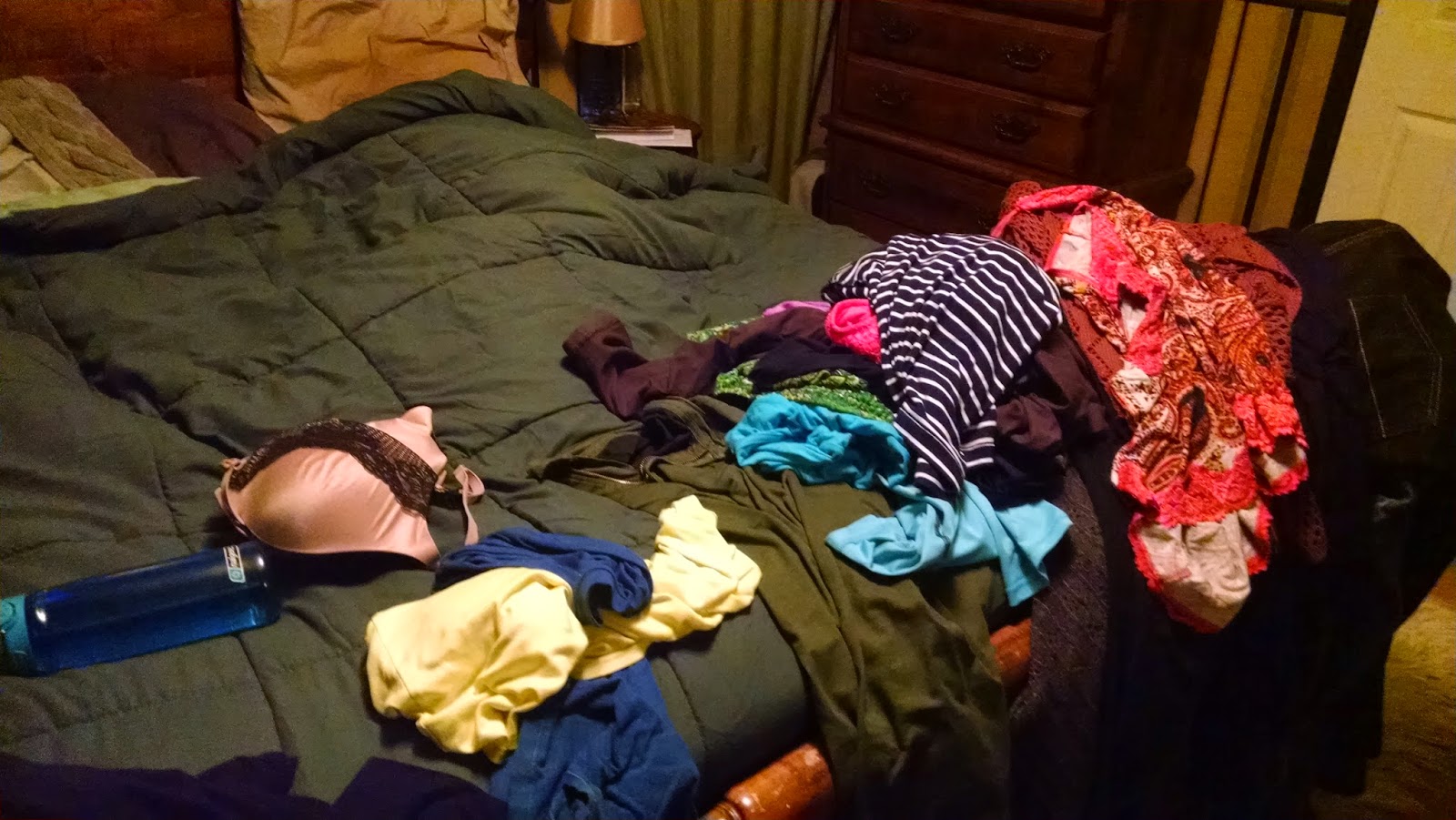 I bought some organizers and got everything all picked up and put away.
It was a ridiculously long process but I have high hopes (as with all new organizing systems) that this one will magically make me a neater and tidier person. Good luck, hm? 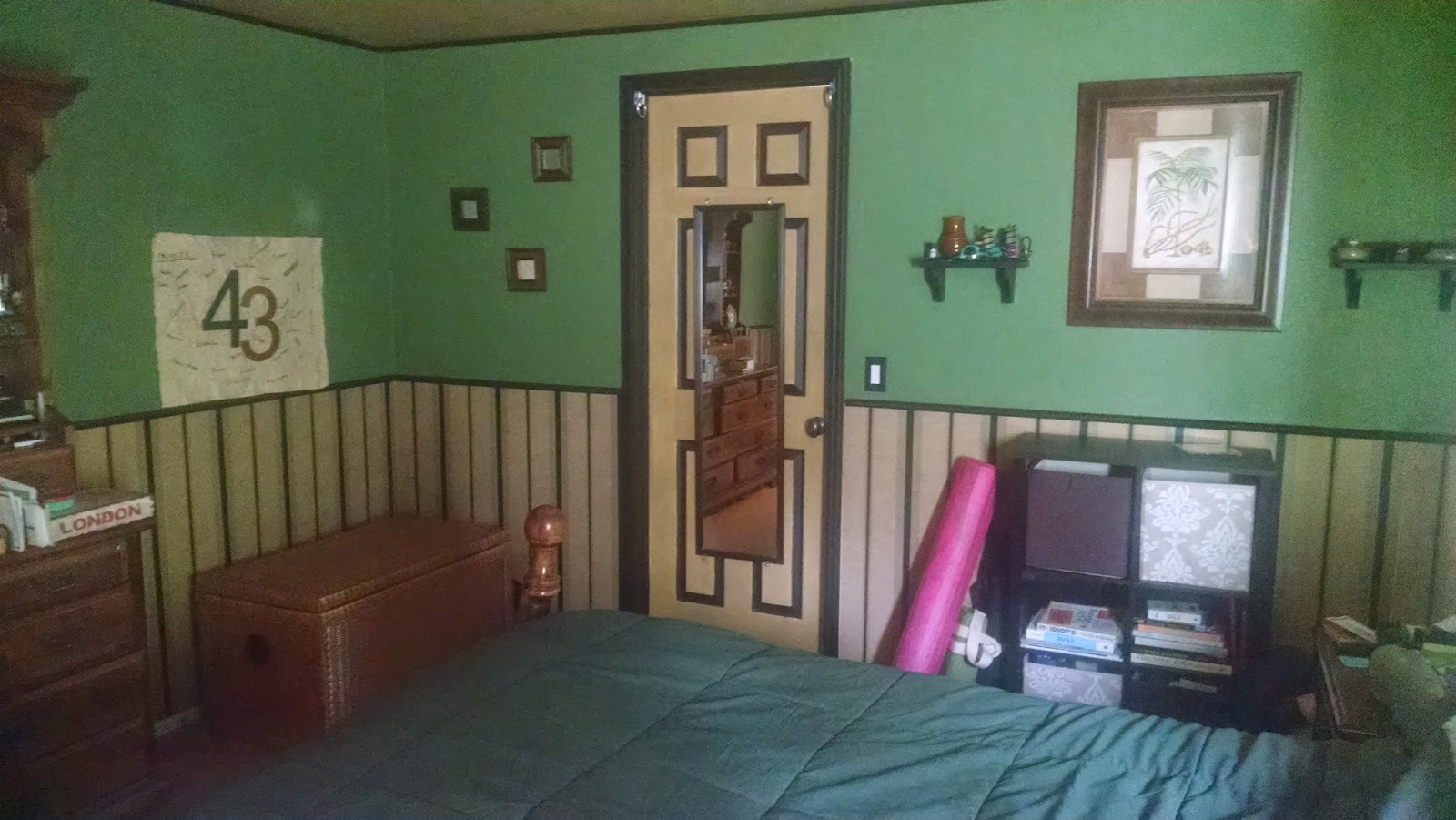 So summer is over and I am getting ready for school.
Hard to believe it's almost that time.