through my bookmarks is the featured special of the day.
In addition to all the lovely blogs and such listed over there >>>
I also have some other favorite spots.
The Seattle Daily Photo blog is a fabulous view of our fair city. Kim, the photographer, always seems to find something interesting, beautiful, or thought provoking to share.

My fav web comics are Questionable Content and xkcd (where you can order this shirt), which is why they are both in the side bar. 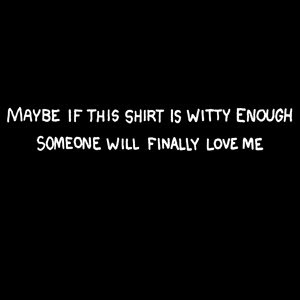 I do also quite enjoy Saturday Morning Breakfast Cereal.
This next one is an AOL site but I swear it doesn't suck. Ficlets is an idea vaguely related to flash fiction but its MORE... check it out.
Susie led me to these puzzles ages ago. They are pretty interesting and once you get the hang of how they work it's a fun way to kill some time. If you like that at all you will love THIS, courtesy of She Who Shall Not Be Named.
Into documentaries? Get a load of this. And if you are a total history geek, not that we know any of THOSE, this is a pretty cool resource.
Then there is
The "Blog" of "Unneccessary" Quotation Marks
Passive Aggressive Notes
Crummy Church Signs
Apostrophe Abuse
and
Literally, a Web Log.
I will stop there, share some of your favorites in the comments, hmm?
Posted by Logophile at 11:03 AM 4 comments:

So a week ago, roughly, Lime did this meme she stole from APJ a long time ago. In a show of solidarity and support I decided to do it too.
No! It has nothing to do with lacking personal inspiration and original thought, thank you very much! No, really, it doesn't, I swear.

The idea is to write your first reaction to the prompt and not change it.
Watch out.

2. I am listening to... The Mountain playing Beck, I'm a Loser

4. I love... that Thing One scored as post high school level in most language art subjects in his end of school year testing, he just finished 6th grade (Thing Two finished out the 3rd grade testing the vocabulary and listening skills of a seventh grader. Much is explained, I should have KNOWN he was listening about as well as a 12 year old, just kidding, I am very proud of him). As a home school teacher that especially makes me happy.

8. I last ate... saucepan brownies, from a recipe courtesy of Lime, mmmmm.

9. The meaning of my display name is.... I love words! I love to read them, write them, hear them, speak them. I love me some words!

13. Love seems to be...more complicated than the press release indicates. Maybe we are still in the beta testing stage?

15. My mobile phone is.... waiting for your call. You never call, you never write, don't you love me any more?


16. When I woke up this morning... I rolled over and tried to ignore the talking. It's Saturday, dang it!

18. Parties…. should be fun, not stuffy. Take note

Thing One has learned 5 new katas (sets of memorized moves in karate). Thing Two has learned all his stuff too. They will both be testing again this week. Thing One for orange belt: Thing Two for yellow.
In 2 months Thing Two has grown 3/4 of an inch. I thought he looked taller when he got back from camp so I had to check. Thing One had grown as well.
The amount of food the two of them consume could fuel a small army.

I watched The Notebook ~ gah, THAT was an emotional wringer.

We have mountains of the never-ending mundane and few possibly earth-shaking situations in the works. Life just keeps happening, hm?
Posted by Logophile at 8:52 AM 7 comments:

because I have a lot of living to do.

I've been visiting family,
and getting my car worked on,
and testing driving cars,
and taking my dog to the vet (annual deal, no big whoop),
I went for a little hike in a lovely park not too far away,
browsed in my local indie bookstore,
mowed my lawn,
watched my husband play softball,
went to the movies,
all because...
MY KIDS ARE AWAY.
Thing One is visiting the Aged Ps and Thing Two is at camp.
Tomorrow, a galpal and I are going on a much anticipated motorcycle ride together.
Thursday I'm going to hang out with another pal, till I take him to the airport.
This week is flying by and the weather is AWESOME!
Photos from the gal's day out. 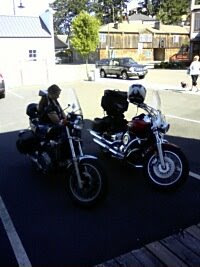 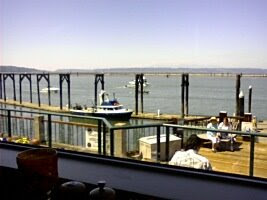 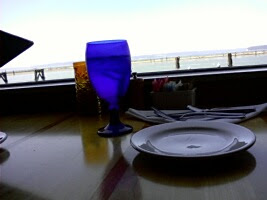 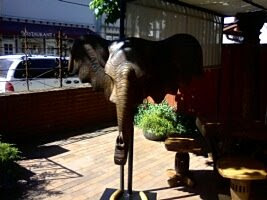 Summer is a berry good thing 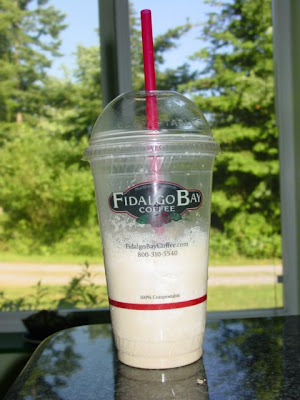 Above you see a 100% compostible cup. It is filled with dulce de leche ice cream and 4 shots of coffee. Yummy, and earth friendly! Thus suitably armed against any stray warmth from the glowy thing in the sky I set out to get... 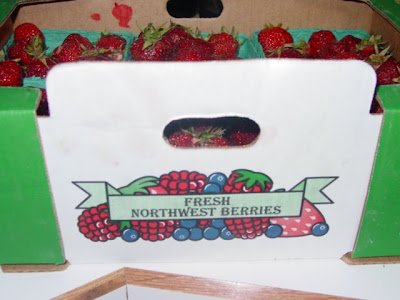 strawberries! No, I didn't pick them! Silly billy, I bought them at a stand. Two flats for $21. Not too shabby. You can add a little of this... 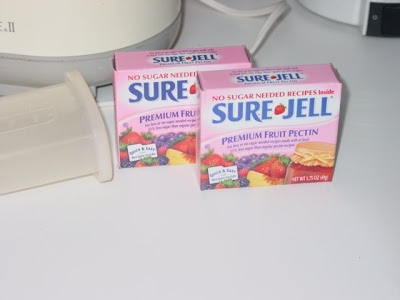 and viola, you have freezer jam. Delish! 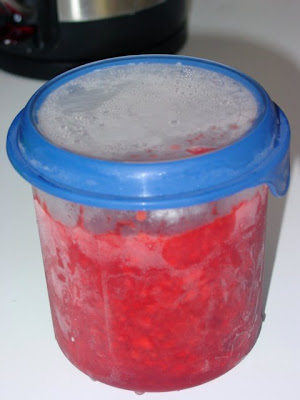 Then, of course, you have to save some for strawberry shortcake with real cream.
Am I drooling? 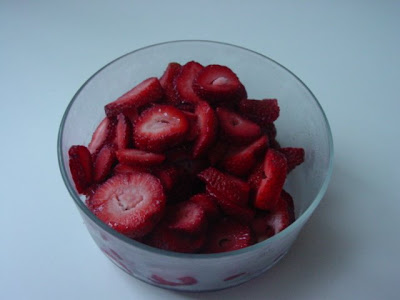 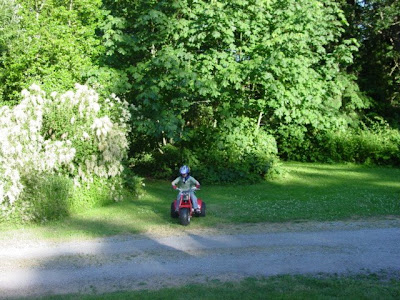 What I did on my summer vacation

When last we left you our brave adventurer had defeated the scorching desert heat with a mister (frankly, THAT was good for way more sexual innuendo than the beaver. The whole beaver schtick is so overworked but the mister..."I was sooo hot, and now my new mister has made me aaaaaaall wet." Anyway...)
On our second day we headed for Spokane to visit the Esteemed Elder Sister and her family. It was a long day because Thing Two kept getting sleepy so we had to stop frequently.
One stop was at 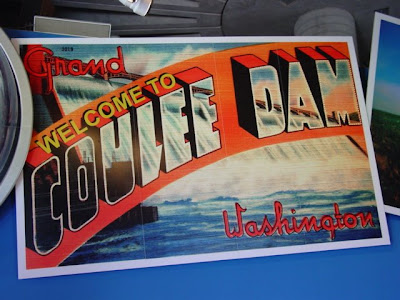 Since they were with me there was plenty of reading involved. 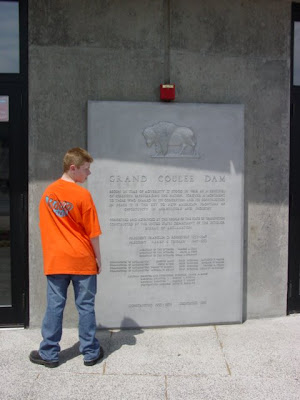 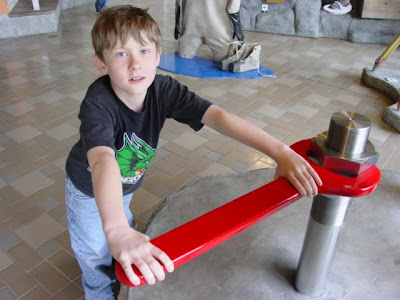 When we finally reached Spokevegas the Things were delighted to kick back and relax. 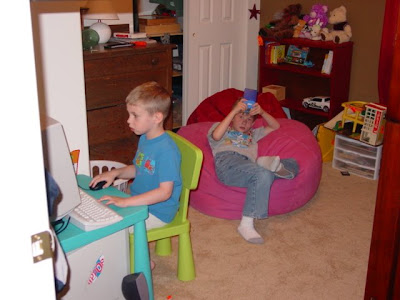 There was also a visit to mini golf, bowling, and batting cages. Then we went to Sonic and took in a movie. 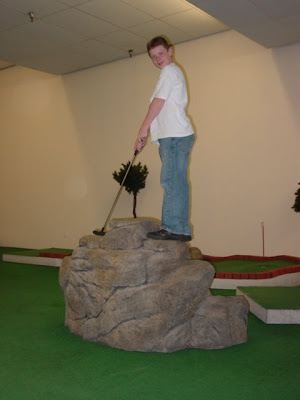 In case you were wondering, Wall e is a very cute flick. We also discovered there are off-road riding areas near Spokane, so we had to do some scouting for return trips with the three wheelers. I got to sit and chat with my sis for a bit( always a good thing) and Mr. Logo and Mr. EES got to shoot the sh...breeze in the garage for a while, so everyone was happy.

Then it was time to press on to the Tricities. Most of the road looked just like this. 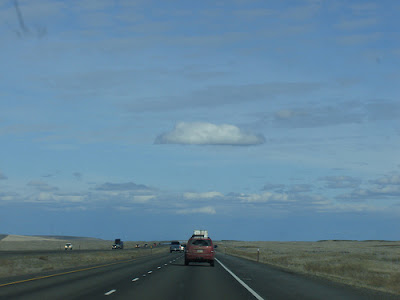 About 70 miles away from Kennewick the Harley started to splutter and cough, and die. We managed to limp it along to this exit. 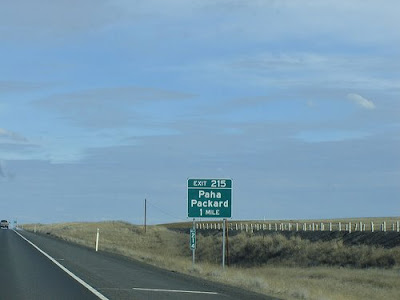 which is still the middle of nowhere, but at least there was a tree to provide some shade. Good thing too, because it was going to be a while. Since Red Molly was still feeling fine Thing One and I carried on to the hotel once we got in touch with the roadside assistance through our insurance (Thank you, Gecko!) and we knew help was on the way, even though it might take some time.

In Kennewick my friend April came over to hang out with us. Last time we visited her she fed us an ENORMOUS dinner which was also delicious so this time we invited her to go out to eat with us. Mr. Logo and Thing One finally made it to the hotel and we went to a lovely little Mexican place with super yummy handmade tortillas. Mmmm

The Kennewick Harley shop couldn't do anything with the bike till after the 4th so we settled in and spent the day with April. She borrowed her mom's van and ferried us all about the historic Tricities area and even took us out to the Hanford site.

On the 5th we were informed that the part required to fix the Sporty was not in stock and couldn't arrive till Tuesday.

This was a mild disappointment (understatement).

Mr. Logo was not thrilled (understatment).

We ended up renting a Uhaul and trucking the stupid thing back but we made time to stop at a couple wonderful roadside attractions, such as the volcano bathrooms and dino park at Granger, WA 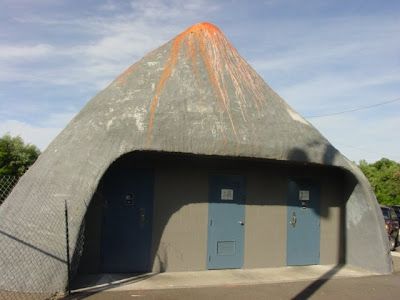 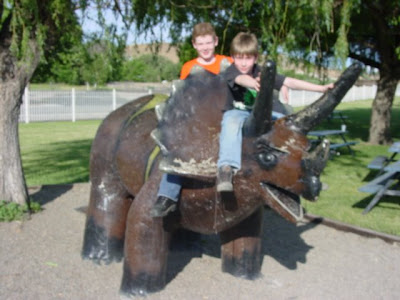 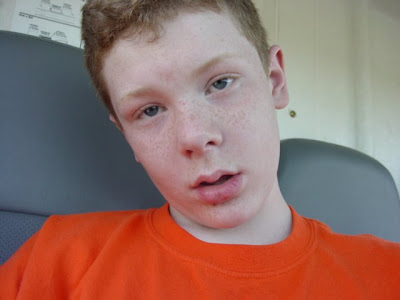 Day One- Welcome to HELL!!

The Logophile family set off early in the morning, the weather was warm and the breeze was gentle. It was idyllic, really. We stopped at a cute little diner for breakfast before heading to the mountains. The twisty mountain roads were clear and traffic wasn't a real problem, it was a lovely start to the family vacation.
Then we crested the pass and began our descent into eastern WA (ok, ok, CENTRAL WA, if you want to be picky about it, whatever). The air began to be warmer, and warmer, and warmer, and ok, it was freaking HOT, the wind was hot, the sun was hot, the Things and I began to think to lose our will to live. 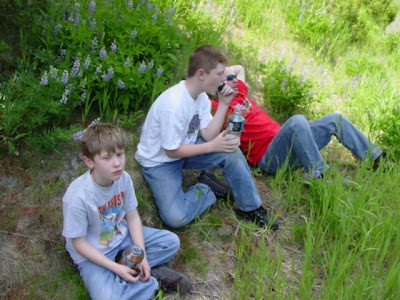 It got hotter.
By the time we got to Winthrop, it was well over 100 degrees.
At Winthrop though, a light shone from heaven, the voices of angels were heard, and this, this rapturous piece of equipment came into my knowledge and then immediately into my possession. 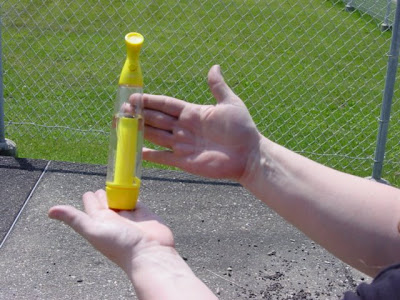 This my friends, is a personal mister. Fill it with water, pump the bottom and a fine mist of cool water can be gently sprayed across your superheated, nearly volcanically hot skin, suddenly restoring the will to live.
After the discovery of this marvel of modern life we felt we could manage one more stop before pushing on to our stop for the day (with a POOOOOOOL!!)
We went to a fish hatchery. 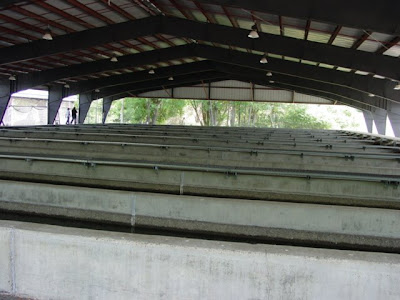 After seeing the baby fish we went out to the pond where you can throw kibbles to the big guys. 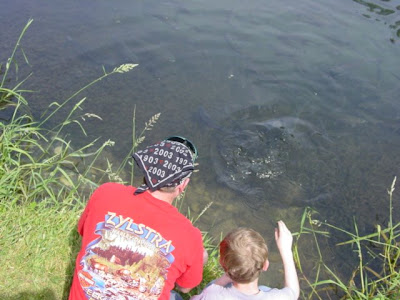 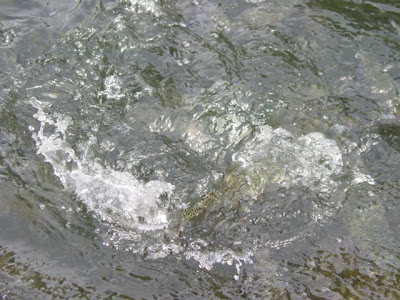 Some of them are pretty impressively large and agressive. One of the guys also unlocked the entrance to the salmon area so we got to see them as well. It was very awesome.

We also got to see some beavers who were hanging out there as part of a pilot program which removed beavers from areas where they are considered a nuisance and moves them upstream to areas that benefit from dam activity, to preserve wetlands and such. 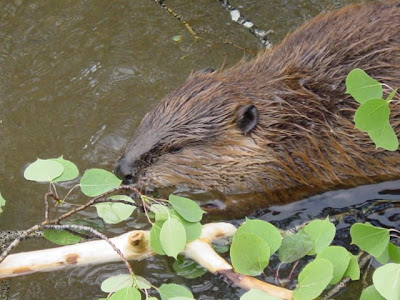 We were there while the biologists from the dept. of wildlife came through to give the beavers some fresh aspen to gnaw. They let Thing One help a little. 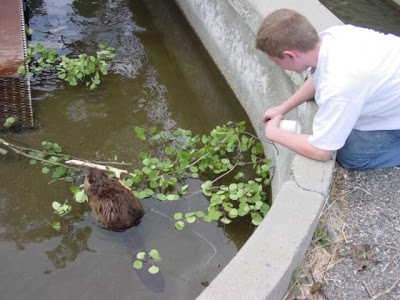 All in all it was a good stop, thank you personal mister, for making it possible!

When we stopped at Twisp for gas it was 110 degrees and I was officially in my own personal version of hell.

After arriving at our hotel I draped myself across the air conditioner until frostbitten and then took the Things to the pool for a couple hours.

We decided at the last minute to bring the laptop, so between the constant internet connection and my personal mister, I may somehow pull through this trip. :p