In Which We Learn... 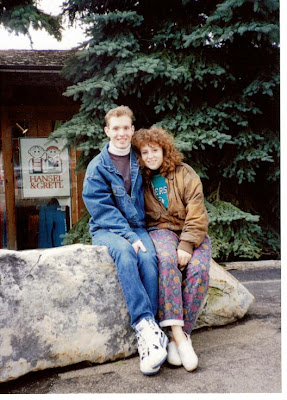 In closing days of the decade of the 80s I met the man who would be my husband, although I didn't know it. I was home from college recovering from mono (NO! I hadn't been kissing anyone) and was marriage was anywhere near the top of my To Do list.
That February he told me that he loved me (I puked) and in March of 1990 he asked me to marry him (I made him wait a week for my answer).
We negotiated a bit over the wedding date and then decided to move it up anyway. Thus it was, while still a teenager (19), I became a married woman despite my previous resolutions not to marry until:
1. I was at least 24
2. I had gone back to college
3. I had traveled abroad
Turns out doing those things after you get married works out nicely too.
On September 15th, 1990 we were married in my hometown with about 300 people present. It's amazing to me that I've been married to my husband almost as long as I was alive before I knew him. 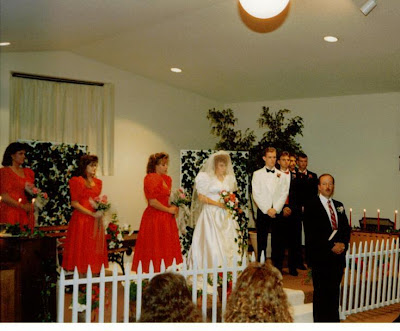 Just in case I hadn't previously mentioned this;
I think Mr. Logo is the best thing that has happened to me in any of the last 17 years. 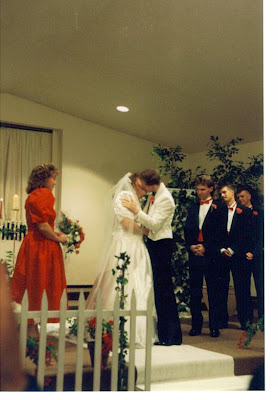 Posted by Logophile at 8:29 AM

Lovely. You two are so cute. In the pictures. And today.

This is just so wonderful. Thank you for sharing yourselves. xo

You two are adorable in every way. I'll wish you a Happy Anniversary as I'm not sure when it is. That really is a love story for our times.

I never new that Hansel and Gretal were married.

well happy anniversary you two love birds. and may i say, logo....you're weak. i made mr lime wait a month for my answer. bwahahahaha. true story.

300 people at your wedding? Wow I had no idea! That even tops our two days shindig of over 100 crazy hippies.

Oh man, I so did not wait for him to ask me, I said to the Rat, "If, and I said IF, you want to marry me, I want a gold band, no diamonds, none of that overfanciness..etc"
I made sure I got what I wanted.

OOps, and Happy Anniversary you two!

This story is so, so sweet!!
Congratulations to you both and I wish you many more happy years. :)

I agree. You got the much better end of the deal. :)

The soap came today! Very cool. It smells so purty! Thank you!

And a Hansel and Gretl picture in teh background to boot. Does it get any better?!

You guys are lucky. I am glad you managed to cross paths.

Wow, I was a real knuckle-head at that age...if I remember correctly i was really heavy into my stamp collection at the time. Maturity, it comes let to some...let's hope it comes to others at all :)

You guys are so dang cute. I love the pictures. Happy Anniversary, darlin!

SO SO cute! Thanks for sharing.

My goodness, you were babies. Beautiful babies, but still babies.

Isn't it weird when you hit that marker where you've been married more than half your life? I've been with MuNKi since I was 17, though we didn't marry until I was 21.

You two DO look VERY young. :)

lovely. absolutely lovely. here's hoping this wonderful love story continues for many MANY years to come. somehow, i suspect it will! ; )

And you are still babies - but so cute. I love your story.