The other day I went to visit the Esteemed Elder Sister who is moving in order to be of assistance with packing or child watching, or something or other.
Her daughter got sick, my dad (who lives across the street) also got sick but
I watched her kids so she could run some errands and I ran a couple errands for her.
I watched while she packed one box and helped make some sauce for some yummy phad thai.
I also let her keep me up past midnight so she could beat me at Scrabble.
She was very proud of this win and requested a special mention as she felt she was poorly represented in the infamous pink shirt episode.
Which brings up a whole new topic for this post, lets follow that rabbit trail, shall we?
The Esteemed Elder Sister is one of the very few people in my daily 3D world who knows of or reads my blog. She does not read often, but occasionally pops by to see what I have to say or admire cute photos of the Things since I am notorious bad about getting photos out.
Yes, that's right, you people get cute pics of my kids and my poor family has to make do with the noisy real-life version, so unfair, anyway...
The EES decided that she needed an appropriately geeky pseudonym if she were going partake in this on-line carrying on.
So she choice the name met2morf.
I feel it should be noted at this point that she chose a far geekier name than just about anyone I know online except maybe Diesel
(by the way, Diesel, she also said that your advice about staying away from pink because of my hair color was totally off base but I am still going with it, I believe in you, man).
But be that as it may...
occasionally she will leave a comment on this or that, and when she commented on the post linked above she had this to share;
met2morf said...
The Ministry of Information would like to state for the record that the portrayal of the EES was grossly fictional. While she is even more witty than her character in the "IT IS Finished" highly fictionalized screenplay of an actual event, she would like to say that her office has long been on record supporting the difference between finding a sale item onjectionable and finding a sale objectionable. She has also long been on the record opposing the use of the third person in references to oneself as grandiose and potentially schizo, as well as refuting them as a a defense strategy for the war on style. God bless America.
To which I promptly replied;
Dear Ministry of propaganda~ Your objections are hereby recognized and completely disdained. While referring to oneself in the third person may on occasion lend itself to grandiosity referring to oneself as an entire department AND in the third person clearly telegraphs a break with reality on a scale hitherto unrealized. I shall bless America when I am damn good and ready!
The rest of you may or may not find us amusing but WE think we are hy-lar-ious!
:p
ANYWAY, after returning home today I had to get the lawn finished even though it was getting chilly. Hurray for polar fleece! 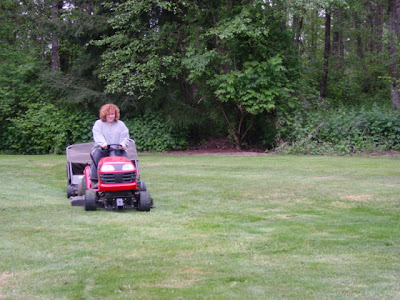 Egan, stop lusting over my mower!
Here is one of those cute picture of the Things I was talking about.
This is history class at casa de logophilia. 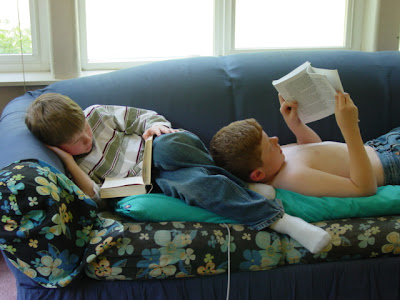 Thing One (that is the older one, the red head, for those of you who have a hard time keeping track) is just finishing up The Middle Ages.
Thing Two (the 8 year old, younger, blondish) is just starting The rise of Roman Empire. Due to their history studies they've both experienced a recent upsurge of interest in archery and swordplay. I try to console myself with the thought that it's better than guns.

Posted by Logophile at 7:57 PM

Eventually they will get to the part where gunpowder is invented...

I don't know, but I think you guys are pretty funny! Silliness is the best!

And damn, I don't even mow but I'm lusting over your mower. I love riding mowers! But yours is red...I prefer green. Ah well.

I wish I could have gone to history class topless...

Sweeet pic of the things reading! I don't know about Egan, but I am lusting after your motor cycle. Show us a pic of that please.
I have an idea, how about a contest where you give away a kayak? Then you could ride over and I'd let you use my kayak while I ride your motorcycle. Doesn't that sound good?

I want to go to your school.

i think you need to fly out someone who is skilled in the art of swordplay. i think my fencing class and infamous duel with the paraguayan known as 'gus' qaulifies me as an appropriate instructor. you could write of the price of my ticket as and educational expense.

oh and the EES really does need a better name.....we need to have a contest to rename her.

Upon reading both your and the EES's comments it is abundantly clear that the 2 of you are very related.

Why can't the EES just be EES??

Time to get some video of them swordfighting! (Hopefully, none of them have seen Highlander, eh?)

Um i hope you got those lines straight on the grass...

Oh, man. I totally want that mower. I WANT THAT MOWER!

Sorry. You told Egan not to lust after your mower, but you didn't make the instructions broad. Ergo, I get to provide some mower lust here ...

And you should be THRILLED that your kids are only interested in archery and swordplay. There were many worse things about the Roman Empire than fighting -- like rampant incest, brothels, pornographic graffiti, etc.

Mower good, mower wants to travel south. Mower looks much better in my yard. Mower will magically be transported to my yard. [poof]

My hubby better not see that mower or he'll think we need one.

You and your sis crack me up. I find you both hysterical!!

Look, I may not know anything about hair or fashion, but I do know that "Diesel" is the coolest name ever.