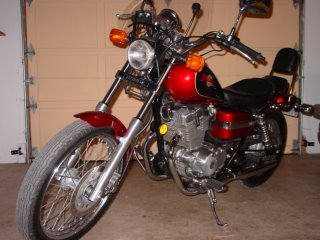 We have send my little Rebel to live with some nice folks not too far from here. After listing in For Sale sections of various publications we found someone to buy it by...sticking a sign on it. The guy from Craigslist bailed when he found out how far he would have to drive to see it. Oh well, he probably was not worthy of her anyway.

The next pic is me trying out a Victory Vegas Eight Ball. 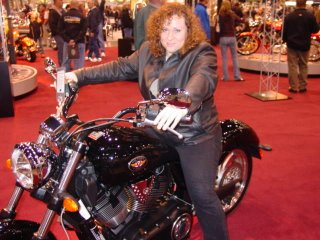 Now, I am 5'5, which I will have you know is just ever so slightly taller than average for an American woman. Nevertheless, it is not tall enough to make any Victory motorcycle work for me, the break and clutch levers are too far as well. If Arlen could get his people working on that I would really appreciate it. But really, I will admit it, I am a sucker for an automobile, be it two wheeled or four, that works well and doesn't cost a bomb and have rigorous maintainence and repair requirements. I have test ridden this next bike several times, and I really like it. 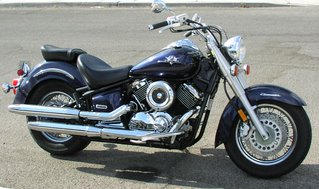 (Cue the angelic music and a focused beam of light glinting divinely off the pipes would be good too.)
This is a Yamaha V Star 1100.
The 650 is fine, but I have been infected with a touch of Tim Allen disease.
However, I solemnly vow to you this day,
as God is my witness... 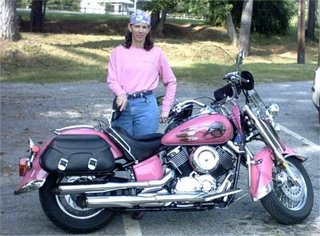 this horror and tragedy will never happen on my watch.

my thoughts are with you during this time of grieving...

oh man, logo.....you really have me all revved up now! i sooooo want one. but i agree NOT that horrifying pink monstrosity.

That pink thing is just so wrong!!!
Ok, If you are too short for that bike, just what the hell would I end up with?
A Barbie motorcycle?
One of those silly mini bikes clowns ride in the circus?

I can't wait to see what you end up with!

I'm a girlie girl if ever there was and lemme say, that pink bike - EWWWW!

Logo, your deets are up and I'm off to resume my visit with family here in CT. :)

The Yamaha V Star you may have. That pink sissy is probably too embarassed to run.

Did you know my first car was a motor cycle?

I am more of Vespa-kind of guy.

I used to have a bike, but my wife made me give it up. She says it's living on a farm in the country where it has plenty of Vespas to chase.

Cindra~ Would it sound callous if I said I was moving on to better things?

Lime~ I have no idea what would make someone think that is a good idea.

Susie~ A Honda Rebel is nice and just your size! :D

Sar~ I hear ya girl, no excuse for that sort of thing. Glad you had a good time!


Quilly~ First one, huh? How cool are you? I only started riding two years ago but I really enjoy it.

Diesel~ Dudr, she lied, the bike just didn't love you anymore and she was trying to spare your feelings.

I am with Susie on this one because she and I are the same height I think ,5'2. Wow , so let us know what you get ! Even though I love pink I have to agree that the last bike makes me want to hurl ! You have a great week !

And just wat is RONG with a Barbie motorcical???????
Mrs. Weirsdo want's to let evry one no we are looking for werk!!!!!

Logo!!
That's Hot!!!!!
I'd totally do the Yamaha V Star!!
And can we please take the pepto bottle away from the biker-babe??? I sense some serious femininity issues.
/Vera

Ooh the Yamaha is pretty; the pink one - well, if she did it for breast cancer awareness, I'd overlook it; if not, I'd run her off the road.

Breazy~ Ya shrimp! :-p
When I get the next bike you can be sure I will let you know, and it CERTAINLY won't be pink.

Pansi~ The Barbie bikes are best suited to the very petite, like you.

Vera~I think you have sensed the issues correctly. I think the V Star is singing to me, that or a Honda.

G~ There are tasteful little lapel pins, there is NO excuse for the pink, none! But you are gracious.

A line from T2 comes to mind.